In 1972 Rene Stokvis had an idea about a simple and spectacular programme to complete the summer programming. Jump in 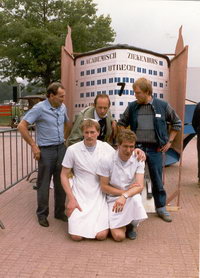 a playful way of a 10 meter high platform in a lake and stay as long as you can in the air. What seems to be so easy, became a programme which was the most funniest, humorous, lang running and crazy Dutch summer television show.

A programme which is shown for many years in a lot of countries around the world.

A summer serie exists out of 8 different programming parts. The main thought of the show is to get a humorous show whit a self invented construction in which the candidates have to complete a course that always takes place above the water. 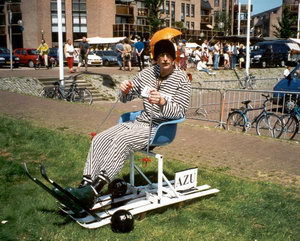 A trophy, flowers and a small price are for those who can realize the fastest time to complete the course. There are also a prices for the most original construction and the most unluckiest candidate. The “beauty” of the programme is in fact the moment in which the candidates, often with a decent speed, drive their vehicles (construction) in a spectacular way into the water. Also the disappointment on the faces of the candidates, when they see their hard work of many weeks disappear within ten seconds because of the failure of their attempt, is indescribable. All candidates find it more important to join the programme than to actually win. Safety is for the organization the primary concern by planning the activities and this will always be double checked. 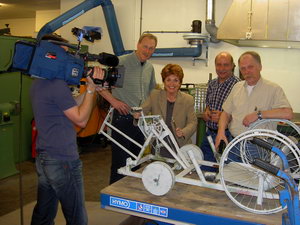 This site is about three friends; Hans van de Brink, Mohammed Slimani and Evert de Graaf of the Universitair Medical Centre in Utrecht (UMC) the Netherlands. They go way back since 1986 when they began with participating in the programme.

Meanwhile they have joined the programme for more than 56 times in different shows. Every year they try again to win the price of the fastest or most original construction. To complete the act (the finishing touch) they wear the most funniest and strange clothes.

Advice to look at

Site page ` UMC deelname geschiedenis` Here you can see all the constructions who have been build over the years categorised by date.

Site page `media` Here you can see all media attention who have been published over the years, such as magazines, photo’s and TV interviews, categorised by date.

Site page `promotie TLTZ hobbydoctor`, Mohammed Slimani, one of the three participants, passed as the only Dutchman on the University of Utrecht as ‘Hobby doctor’ because of his research to the popularity of the UMC team in the regent by joining the programme every year.

Site page `Fotoboeken` Here you can see all action pictures and the other constructions who have been build by all other competitors over the years categorised by date sinds 2001. 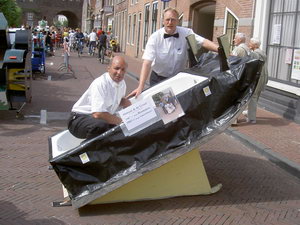